Skip to content
Crimean Congo hemorrhagic fever is a fever spread by the genus Virus (Nero virus). Which was first found inside Crimea at 3 and then in Congo at 7. Because of this it is known as the Crimean Congo. – The disease is mainly found in Eastern Europe, Central Asia of China, Southern Europe, Africa and the Indian subcontinent. 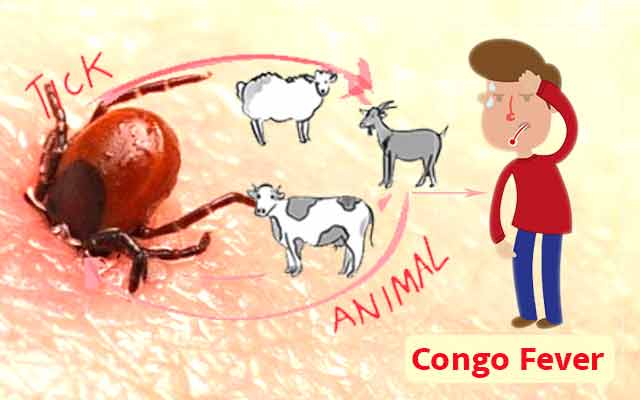 Crimean Congo Disease Prevalence
• The disease is transmitted through the bites of ticks in the hives, which are responsible for the spread of the virus.
• This scramble lives on the body of many wild as well as domesticated animals such as cows, buffaloes, sheep, goats.
• The virus develops in these animals but no signs of disease are seen in these animals.
• The spread of the virus in humans is caused by the contagion of an infected animal’s blood or intestines. The outbreak is then transmitted from a single person to another person by contagious infection. In hospitals, the disease has also been reported due to inadequate sterilization of medical equipment, re-use of Series Needle and infection of medical equipment.
• The incubation period for this disease is usually 1 to 3 days. But the incubation period has also been observed for up to 7 days during human-to-human transmission.

Headache, backache, abdominal pain, redness of eyes, redness in palate, rashes on body parts, blood flow instead of ejection, excessive fever 3 degrees or more, joint pain, vomiting, throat infection, lower back Blood flow.
The disease is divided into 3 categories A, B and C depending on the severity of the symptoms and is treated accordingly.

The disease can be diagnosed by serological test or by immunohisto chemical training in the presence of virus antigen or by the detection of viral R.N.A. in blood or muscle.

Who Can Crimean Congo Fever Disease?

• Individuals involved in pastoral and agribusiness should use pesticide repellents on their body skin and clothing.
• Pesticide repellents containing DEET are very effective against this intestine.
• Disposal of dirt caused by crabs and cattle.
• It is imperative for these individuals to wear garments that cover the entire body, in addition to the gloves of the hands and feet. • These individuals should avoid contact with blood or other body secretions of animals or persons with signs of disease.
• Health workers treating patients with the disease should also take adequate infectious measures (infection control prescriptions).
Environmental factors
• Environmental changes, poverty, social instability and lack of standardized infection control procedures.
• Infectious tick bites or direct contact with an infected man or animal can spread the disease through contact with blood or body fluids, tissue, etc.
• Thus in rural and urban areas where tick baiting or infectious human being, livestock are in direct contact.

• He was first reported to the Health Department on 17/01/2011 when he came to the private hospitals of Ahmedabad city for treatment of cases of viral hemorrhagic fever with few serious symptoms / symptoms.
• The basis on which immediate action was taken.
• The outbreak of this epidemic was Aminaben Umar, 32, of Kolt village in Sanand taluka of Ahmedabad district, who was pronounced dead on 03/01/2011 during intensive treatment at Shelby Hospital, who suffered severe symptoms.
• Doctor Gagan Shake (Sharma) and Nurse Ashaban John, who have been engaged in intensive treatment of Amina Ben, have also been admitted to Shelby Hospital as an inpatient for intensive treatment of periodic symptoms of similar symptoms. Died on / 2011.
• Sampling of Amina sister associated with the treatment of Radha Gagan Shake (Sharma) due to death of Radha Gagan Shake. Sent,
• Following this, the N.I.V. Poona, which is a government-owned institution mostly affiliated with Medical Research and has advanced facilities in the diagnosis and viral culture of viruses, also acted very promptly on diagnosis of this disease on date 18/01/2011 C.C.H.F.V. As was done.
• N.I.V. Diagnosed by Puna C.C.H.F.V. The case of the disease has not been registered in the state before, but according to information obtained from the Internet and various national bodies, the disease was required to be dealt with promptly, on the basis of adequate alertness, by the Chief District Health Officer, Ahmedabad. A survey was conducted to find out the cases Was. So far 3758 households and 15928 persons have been surveyed.
• At this stage staff members of the Civil Hospital, Ahmedabad and Shelby and Sterling Hospital have been advised to take close treatment at any hospital where there are any suspected cases of the outbreak. And Isolation ward has been erected at the Civil Hospital.
• This type of operation is done by Ahmedabad Has also been undertaken by the corporation. In the urban area, 1990 households of suspected patients area and 8789 persons were surveyed.
• During the survey, blood samples of 222 individuals were examined by N.I.V. Sent to Poona. Of which 3 blood samples were from C.C.H.F.V. Positive for.
• Livestock and ticks are an important factor in the spread of the disease. The State and District Animal Husbandry Department has been informed about the epidemic.
• Surveillance of the disease has also been initiated by the Animal Husbandry Department in cattle. In addition, 6076 cattle have been sprayed with pesticides and the carrier’s insect bladder has been destroyed.
• Knowledge of this disease school being formally communicated to the Government of India, N.C.D.C. (N.I.C.D.) Delhi and N.I.V. Poona teams are also involved in pest control. They have returned the required information from Shri here on 23/01/2011.
In this connection, a meeting was held with the Minister, Health and Family Welfare Department, on 19/01/2011 at Shahbag NXC Ahmedabad with the highest level officials of the Health Department as well as specialist doctors and private hospital authorities.
• The amount of drug used against the disease is available in sufficient quantities in the state, and additional amounts are available from the Government of India.
• The Department of Health, in collaboration with the Indian Medical Association, will provide information on the disease to all private doctors in the state through their forthcoming bulletin as well as E-Mail.
• The Commissioner’s Health also reviews the epidemic on a very regular basis and intensive work on infection control practices and biomedical waste disposals is likely to result in the spread of infection to hospital staff as a result of this epidemic.

Planning next time to escape the Crimean Congo Fever

• Dirt disposal and sanitation maintenance.
• Prevent the transmission of virus from animal to human by closely monitoring the action of tick control by spraying insecticides in the affected area.
• Intensive fever surveillance work in the affected area.
• Isolation ward system for patients.
• All-inclusive operation of infection control practices and disposal of biomedical waste.
• Health education
Sharing